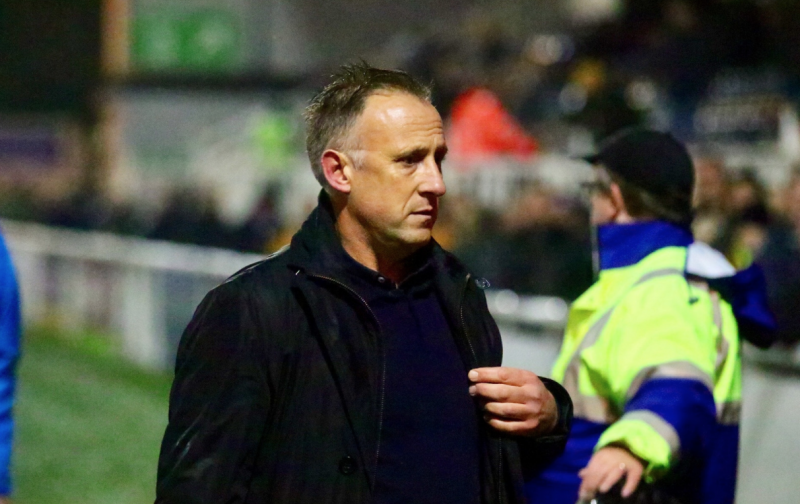 2017 was a testing year for Solihull Moors but we move into 2018 full of life and ready for the challenge ahead.

If 2016 saw Solihull Moors revel in the highest of highs, 2017 was the inevitable punch in the gut that always seems to follow.

To say it has been an awful year would be wide of the mark. We are still living the National League dream and Saturday’s victory has given us hope that we could do the unthinkable and stay up once again.

Rewinding back to January and we could not have begun 2017 in a better way.

Liam McDonald was in charge back then and we thumped Chester on their own turf, Jamey Osborne, Liam Daly and Harry White amongst the goals. We won four of the opening eight fixtures in 2017, keeping five clean sheets and revelling in the form of new signings Nathan Baxter, Kristian Green, Simeon Maye and Regan Charles-Cook, whose debut double helped see off Sutton United – the club that had just knocked Leeds United out of the FA Cup.

We responded to a home defeat vs Wrexham by drawing 0-0 away at high-scoring Dover Athletic, turned a 3-0 deficit into a point at home to the powerful Braintree Town and thrashed relegation certainties North Ferriby United 4-1.

At this stage we knew that one, maybe two wins would be enough to secure survival. We were ten points clear of the drop zone with nine matches left to play, two points off the 50-point mark. Our aim was to finish in the top half having been right amongst Bromley, Boreham Wood and Eastleigh.

We were desperately unfortunate against title challengers Forest Green Rovers. We were well beaten at home to Barrow on the club’s community day, failed to get going against a poor Torquay United outfit and barely laid a glove on Aldershot Town. The infamous Prenton Park massacre followed and a 2-1 defeat at home to York City made it six defeats in succession. Incredibly we were now level on points with Braintree Town and staring relegation in the face.

Then came the moment Liam McDonald would recall as his favourite moment of the season.

One-nil down at Macclesfield Town, George Carline sends Connor Franklin’s left-wing crashing in off the crossbar. Jack Byrne heads home a corner and Andy Brown sets up Regan Charles-Cook to secure the three points. Three points were followed by another as Charles-Cook’s screamer and Simeon Maye’s header secured survival. A bizarre yet thrilling end to the most incredible season.

We all wanted to build on survival. Boreham Wood and Bromley had all built on late survivals and we wanted to follow suit.

On paper, we had a decent pre-season. Of our 9 matches we won 7 (including victory over Walsall), drew 1 and lost 1, the defeat coming against Championship Burton Albion. Sure, we had lost Jack Byrne, Liam Daly, Andy Brown and Ryan Beswick and there were unquestionably concerns about the defence but we had signed players that had thrived elsewhere including another three from Stourbridge, Jack Edwards from Leamington and ex-Football League trio Paul Green, Darren Carter and Jermaine Hylton. Crucially, Oladapo Afolayan, Kristian Green, George Carline and Shepherd Murombedzi were still at the club too.

Nobody expected an easy season but the early signs were far worse than anticipated. We conceded 10 goals in the opening three matches, earning one point. The lack of experience was telling and half of the team appeared to be blowing out quickly in matches. There was an enormous reliance on George Carline’s aerial prowess and with Jermaine Hylton injured, Oladapo Afolayan was effectively a lone ranger in attack.

Liam Daly returned, several loanees were brought to the club but our only two victories came against Torquay United, thanks to Nathan Vaughan’s remarkable goal kick, and a Chester side who are without doubt the worst team I have seen at the ATG. The poor form together with the late postponement of our opening day fixture, the delayed kick-off at home to Tranmere Rovers and the flooded dugout in the Chester fixture meant the club had becoming a laughing stock.

Not all of it was Liam McDonald’s fault but he paid the price after a dismal home display against Ebbsfleet United.

Richard Money took the reins and the early signs were promising, his debut being the family day against Hartlepool United that saw 2,658 fans turn up. There was a wonderful image taken at half-time of our youth teams together on the pitch, a beautiful image that encapsulated what this club is all about.

The performance was brilliant but the late heartbreak continued. An unnecessary replay against Ossett Town in the FA Cup was followed by a 4-2 defeat away at relegation rivals Guiseley. We beat Eastleigh away from home before being spanked 4-0 at home to AFC Fylde. Sean St.Ledger signed then a day later Richard Money resigned.

Bottom of the league, six points from safety and now searching for a third manager to take over a side that had already used 34 players in the league.

Consistency was not so much a hope as a necessity.

Gary Whild oversaw our FA Cup defeat to Wycombe Wanderers, which felt strangely inevitable, and a 2-0 defeat to Sutton United before Mark Yates and Tim Flowers arrived. Talk about a coup!

I’m conscious of overstating the importance the managerial duo have had on this club as it remains early days. However, we are now training three days in the week resulting in a much fitter, sharper and organised team. Having been left exposed for much of the season, Liam Daly, Fiacre Kelleher and Paul Green have been immense for a side that are yet to concede more than one goal in a game under their stewardship. Jamey Osborne has plugged a gaping hole in our attacking play and Jermaine Hylton was flying prior to his red in the FA Trophy win against Tranmere Rovers – we beat Tranmere Rovers!

Eight games, two wins, three draws and three defeats doesn’t look like a great record but is represents a vast improvement on our previous form and every fan knows the performances have warranted more. That’s why the victory over Barrow was so huge. It proved that we can score goals, that we can turn defeats and draws into victories and we are a much better side than our league position suggests.

We appear to be catching up with the rest of the division and have done so at a pivotal point in the season. We have time on our side while expectations remain minimal, we are making huge strides on and off the field.

We have seen Jamey Osborne and Akwasi Asante join Grimsby Town and Omari Sterling-James move to Mansfield Town, providing a platform for fine non-league talents. Our youth set-up continues to churn out talent too with Marshall Willock joining League Two Chesterfield, Tyrese Shade, who lit up the early part of pre-season, now with Leicester City and Josh Endall, who made his debut last season against Eastleigh, recently moving to Coventry City. Jamie Chisholm also had a trial with Birmingham City.

We may have been one of the last clubs in the division to do so but the club is now training during the day time as we move towards full-time football. The stadium continues to be developed and while mistakes have been made during the course of the year, there are positive vibes around the ATG.

If 2017 was the inevitable punch in the gut that follows glory, 2018 could be the third act of a remarkable story as we succeed against the odds and look ahead to a wonderful future.

Then again, it’s not always that easy.