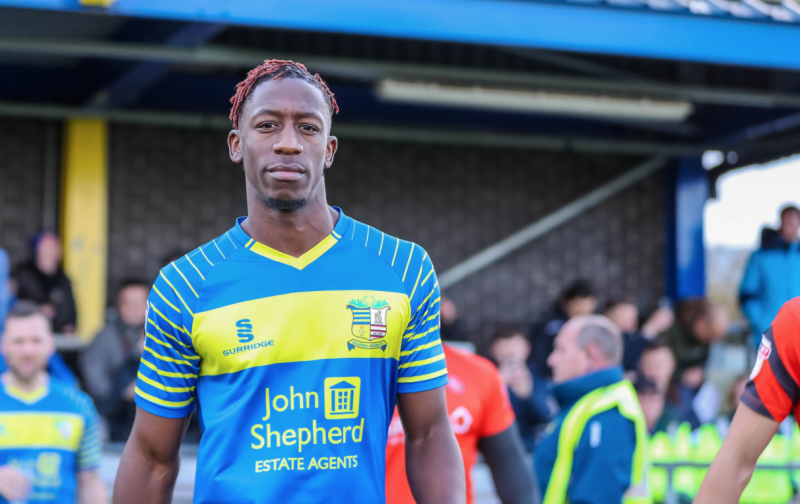 In 18 months at Solihull Moors, Shepherd Murombedzi became a fan favourite and our longest-serving player.

Shepherd Murombedzi must have thought he had seen it all.

A prodigy of Reading FC’s academy set-up, he spent time on loan at Bognor Regis Town before spells with Oxford City and Banbury United. His time at Torquay United was cut short due to financial troubles before short-lived spells with Nuneaton Town and Hayes & Yeading United.

Incredibly, he was just 21 years old when Solihull Moors became club number 7. I’m sure stability would have been part of his thinking as he signed the deal, preparing himself for a second shot at National League football and a real shot at career progression.

Instead, his 18 months in Solihull would see him play alongside some 60+ footballers under the stewardship of four permanent managers, performing a range of different roles for a club that struggled to build on its early promise.

And yet ‘Shep’, as he is more commonly known, left on Tuesday as a fan favourite and the team’s longest serving player.

Signed as a raw but talented winger by Marcus Bignot, he left as a mature, tenacious and diligent footballer, a man for any role when the call was made. A familiar figure and a pillar of consistency on the pitch for a team that has been welcoming a new player or two every week.

It wasn’t planned this way. Bignot’s plan was to employ Shep either at right wing-back or on the right-hand side of the midfield to make the most of his pace and energy for a side ready to set the National League alight. An organised team full of club stalwarts that would give Murombedzi the freedom to showcase and refine his talents

It was when Liam McDonald took over that Shep’s role began to change, becoming a victim of circumstance as experienced stars were replaced by lower league talents that McDonald himself never really trusted – particularly his summer additions.

Shep started filling in as the number ’10’ or at right-back or as part of a front three or right wing-back. He even spent time as Darren Carter’s regular central midfield partner. Wherever McDonald felt his side were weak, Shep plugged the gap as best as he could.

This continued after McDonald was sacked. Richard Money played him off the front in a 3-4-3 system before playing him right-back in a more attack-minded 4-3-3. Mark Yates was prepared to leave Shep out of the side yet he instantly found a player he could rely on, replacing Jermaine Hylton, Paul Green, Darren Carter and Jamey Osborne in a variety of positions either in the middle of the park or as part of a three-man attack.

The above may unfairly suggest that Shepherd Murombedzi was the perfect number 12 or Solihull Moors’ own James Milner or Wayne Rooney. A player of many positions, master of none.

That would be wide of the mark. At his best, Shep is a rampaging right-winger, one with an ability to drop a shoulder, step over the ball and beat his man. A player whose acceleration over five yards meant he has the beating of most full-backs and whose tenacity means he rarely goes missing in games. If you want to see Shep at his best, check out his assist against Kettering Town in which he pasted his opposite number before delivering a pinpoint cross for Andy Brown to head home.

His departure on Tuesday was in the making for a few weeks if fan rumours were to be believed and on reflection the decision is understandable. Not that it made seeing the news any easier. I’m gutted to see him leave on a personal note as much as from a footballing perspective.

Shep was one of the first players Vital Solihull Moors began conversing with after creating this website and he has always had time for us, being one of the first players interviewed by co-editor Joel while he was extremely pleasant when we met him at the end of the season awards ceremony. This appears to be a common theme amongst supporters too – check out @y_jun07’s farewell message.

Since I started writing this piece, he has joined Chester FC where he will be reunited with the man who brought him to Solihull Moors – Marcus Bignot. On the face of it, this seems like a logical move, joining up with a manager who is likely to give him a new lease of life and fit him into one or two positions rather than 7 or 8!

It does mean he has joined a club battling against National League relegation, albeit one with much higher expectations than that of Solihull Moors, a club he now finds himself in direct competition with in the fight for survival.

It certainly provides another story for a 23-year-old who must have thought he had seen it all by now.

Farewell Shep. It’s been a pleasure.