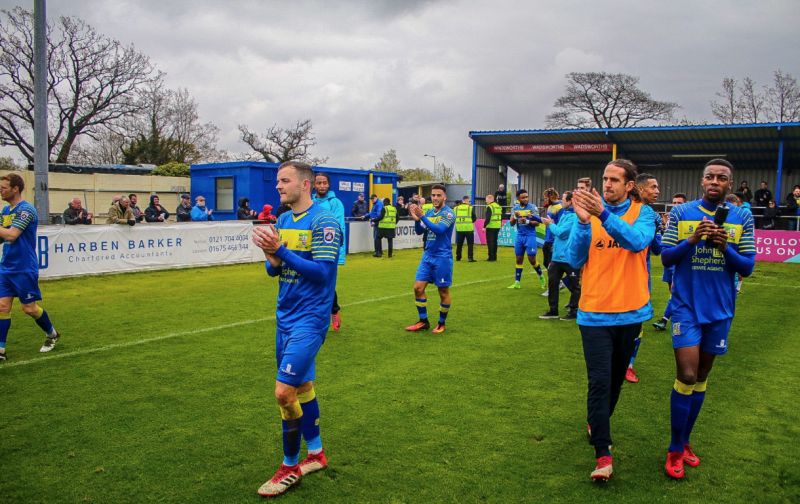 It feels like an entire season ago that Solihull Moors fans departed York Road in a state of desolation.

Despite improved performances under Mark Yates, The Moors had just succumbed to a third successive defeat on the road, a momentary lapse in concentration from a set-piece enough to leave us empty-handed.

This particular loss, at the hands of newly-promoted Maidenhead United, was our 17th of a league campaign only 26 matches in. Of the 47 league games played in 2017, we had lost 27. As many managers had taken charge of league games as we had victories.

Barrow were the side directly above the relegation places. Their Holker Street home was the scene of our next game. A win for Barrow would leave us 15 points from safety, relegation a mere formality. A win for The Moors would cut the gap to 9, a glimmer of hope.

We conceded. Another set-piece leaving us on route to a fourth consecutive 1-0 defeat on the road. Our captain, Darren Carter, led the fightback with a splendid volley but a 1-1 scoreline wasn’t enough. We had to win. Then our luck began to turn. We won a penalty. Jamie Reckord stepped up, scored his first goal in Solihull Moors colours. We held out to secure the most pivotal three points of the season.

And the rest, as they say, is history.

Everything that could seemingly go wrong, went wrong.

Nine pre-season matches brought about seven victories and having seen most of last season’s squad depart, the new bunch were proving pretty efficient. Walsall were amongst the sides dispatched and things looked promising leading into our second National League campaign.

Game one – postponed. Safety procedures had not been signed off correctly. By the time our season started, three days later than planned, Simeon Maye and Kristian Green had joined Jermaine Hylton on the sidelines. Six National League novices took their place in the starting XI and we were comfortably beaten by Leyton Orient.

Things didn’t improve. We lost 10 of our opening 14 matches. Our two wins came against Torquay United (courtesy of a winner scored by our goalkeeper inside of his own area) and a Chester side that is by the far the worst we have seen at this level. We drew the other two despite leading in the 93rd minute of both.

Our game against Tranmere Rovers was delayed by 10 minutes because one of the goal nets was ripped. Liam McDonald, his coaching staff and substitutes were forced to sit on plastic chairs either side of a flooded away dugout in the re-scheduled Chester game.

The club were taking an awful lot of stick from opposition fans for the handling of the postponed opening game of the season. We were jokingly coined “Tinpot FC” by Nathan Vaughan in a self-deprecating tweet.

We were conceding just short of two goals per game on average and had used 26 players during those opening 14 fixtures. Bereft of leadership, organisation, stability and confidence, Liam McDonald left the club after 11 months in charge.

Within a day of Liam McDonald’s departure, Richard Money was announced as the new gaffer.

The former Cambridge United, Walsall and Luton Town boss was quite a coup for Solihull Moors. His appointment rightly generated excitement and his recent appearances at the ATG as a paying spectator meant he had an idea of what his team were (or weren’t) capable of.

He also managed to add a new goalkeeper, two left-backs and two forwards, give league debuts to Jermaine Hylton and Romario Martin and start both Liam Daly and Jordan Liburd in attack against Ossett Town and Guiseley, respectively.

His final act was to persuade Sean St.Ledger to join – the day before announcing his decision to leave with the club bottom of the league table.

Gary Whild was left to pick up the reigns of a club already resigned to its fate. He didn’t want the job permanently but felt obliged to offer a helping hand while a new man was consulted.

If one statistic summed up the poor mentality of the squad better than any, it was that Solihull Moors had conceded a goal in the final ten minutes in nine of the ten matches that preceded Mark Yates’ appointment.

It would happen once more all season.

When asked about the moment they knew we would complete the great escape, everybody has a different opinion.

For Darren Carter it was the back-to-back wins against Barrow and Maidenhead United leading into 2018. For Kyle Storer it was the last-minute winner against Hartlepool United in early April that sparked a run of 3 straight wins. For me, it was Alex Reid’s clincher against Bromley that gave us our first win in five matches.

For Mark Yates, it was his first game in charge. More specifically, it was the performance of his first signing for the club – Kwame Thomas.

In an interview towards the end of the season, Yates claimed that the work ethic of Thomas during his debut against Maidstone United showed the rest of the team the level they needed to reach if they were to pull off a miraculous escape.

It worked. The work-rate increased, the team were far more organised, fighting and covering for one another on the pitch. It’s why Yates and Flowers were afforded time despite just one win from their first seven matches. Changes were being made for the better and everybody felt that a short run of results could be the catalyst for an unlikely climb out of the drop zone.

We responded to defeat against Maidenhead United with that comeback victory away at Barrow. Two days later, on New Year’s Day, we played Maidenhead in the reverse fixture. We were 1-0 down but confidence was high and our quality showed, Oladapo Afolayan’s scoring a brace either side of a Darren Carter worldie.

We drew away at league leaders Macclesfield Town. We thumped Woking at home and did the same to Dagenham and Redbridge at Victoria Road.

We now had a squad capable of taking on anybody in the division. Max O’Leary, Tyrone Williams, Jamie Reckord, Jamey Osborne, Kyle Storer, Adi Yussuf and Alex Reid added plenty to a team whose improved organisation, work-ethic and determination was combined with extra pace, power and genuine quality. We were going to take some stopping.

By the time January finished, the gap to safety had been cut to one point.

As an avid fan of football, I’ve watched countless managers appear to crack the winning formula like magic before their teams fall away, as if the players are incapable of keeping up such levels of consistency.

It wasn’t necessarily that performances dipped alarmingly but Solihull Moors were in touching distance of escaping the drop zone and for whatever reason, we just couldn’t claw our way out.

Our first opportunity was at Ebbsfleet United but Luke Coulson’s winner left us empty-handed. By the time we beat Dover Athletic at home, Barrow had also put a win to their name and when offered another chance to escape the bottom four at home to Wrexham, we did everything but score.

The bad weather soon hit and after two and a half weeks without a league game, we returned to play five games in two weeks. Sutton United beat us 1-0, Gateshead denied us victory in the 94th minute and we were fortunate to escape with a point against Torquay United.

Barrow sat three points ahead of us when Bromley came to visit. Without a win in four, Yates returned to his strongest available starting XI and Kwame Thomas gave us an early lead. The game became scrappy from that point on. Liam Daly and Fiacre Kelleher had the games of their lives while Paul Green and Kyle Storer seemed to be first to every second ball. On the rare occasions Bromley did escape their markers, they found Max O’Leary in exceptional form.

The legs were tiring. We had given it everything then in the 94th minute, an injured Darren Carter hooked a ball he didn’t want up into the air. Alex Reid chased it, forced a mistake and lobbed the keeper. Solihull Moors 2; Bromley 0. Game, set and match. Almost everybody on the pitch came charging forward to celebrate in front of the home crowd.

It was in that moment I personally decided we were going to do it – even if the pessimist in me refused to admit it. We were going to pull off the impossible dream.

We Are Staying Up

When the National League fixture list was released, many believed that the Easter period would be a series of free hits in our battle against the drop. Aldershot Town at home, Tranmere Rovers then Hartlepool United away. We would be facing three of the expected top four almost within the space of a week.

As it turned out, we were the better side in a 0-0 draw with play-off chasing Aldershot, our trip to Prenton Park was postponed and our trip to Hartlepool United became something of a relegation six-pointer.

Against the start of season odds, the pressure was on Solihull Moors to earn victory at Victoria Park and it spurred us on. Unfortunately, our old nemesis Scott Loach was keeping net for Matthew Bates’ side and he denied Adi Yussuf twice as well as Jermaine Hylton, Liam Daly and Jamey Osborne. When we did beat him, the bar came to his rescue.

We tried opening their defence and it didn’t happen. We tried the spectacular but it wouldn’t come off. Then in the 88th minute, Adi Yussuf hung a leg out and Darren Carter’s whipped corner, that had missed all targets at the near post, struck the boot of the Moors number 9 to secure a famous victory.

We were out of the bottom four for the first time since August 7th. Since before we had kicked a ball in the league.

There was no stopping us from that point. Despite losing Liam Daly to suspension and Jamie Reckord to injury, we made it nine points from nine with home victories over Maidstone United and Sean St.Ledger’s relegated Guiseley.

Daly returned to help us earn a hugely impressive point away at free-scoring AFC Fylde and goals from Jamey Osborne and Alex Reid were enough to avenge last season’s horror show at Prenton Park.

We had done it. Solihull Moors would go into the 2018/19 season as a National League club.

In the final 20 matches of the National League season, Solihull Moors won ten, drew seven and lost just three. Only champions Macclesfield Town (44) and runners-up Tranmere Rovers (39) secured more points than our 37. We achieved more points than third place Sutton United and even AFC Fylde and Ebbsfleet United who put together wonderful late runs to take their spot in top seven.

And we did all this having lost our top scorer Oladapo Afolayan in January. Over those 20 matches, Adi Yussuf top scored with five goals. This was a team effort. From Maidstone United away to the victory at Tranmere, the players gave every ounce of energy they had to keep us in the National League. No stars. No outliers. A team united to one cause, one goal.

It’s clear that the mistakes made this season can’t be made again. Academy graduate Callum Coyle became the 50th player to play for the club in the league, a number that extends to 52 if you include the FA Cup. And that doesn’t include Darren Acton, who sat on the bench against Wycombe Wanderers, or Shomari Barnwell and William Mellors-Blair who left the club without kicking a ball.

It’s clear that Yates has already begun the process of bringing stability back to Solihull Moors. His chosen 16 rarely changed during those aforementioned 20 matches unless suspension or injury forced his hand. The board rightly appear to be backing their manager and we could be in for quite an exciting summer.

However, we’ve more than proven that the improbable is most definitely possible.