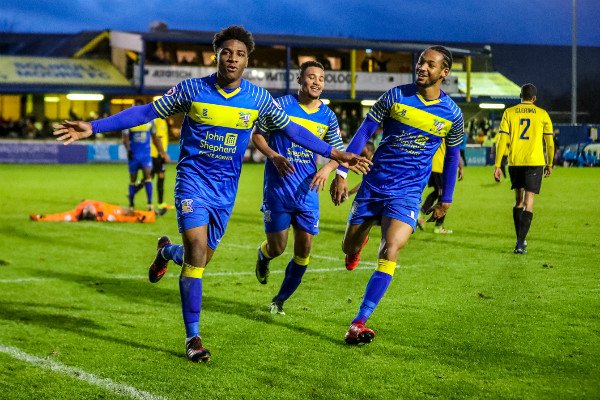 Oladapo Afolayan joined West Ham United on deadline day and they have a serious talent on their hands.

It`s a Tuesday night in East London and Leyton Orient haven`t had to get out of first gear to go 2-0 up against Solihull Moors.

A positive pre-season has raised expectations ahead of the new campaign but Liam McDonald`s new-look side are being outclassed all over the field. The first goal came from a set-piece before Dave Mooney was given all the space he could want in the 18-yard box to double the lead. With less than 15 minutes to play, our chances of a result have all but vanished.

Solihull Moors` number 17 has been on the periphery throughout, lacking support from his strike partner and spending most of his game chasing hopeless clearances into the channels. His frustration is growing but as the travelling fans know, this isn`t necessarily a bad thing.

Desperate to get a kick of the ball, he drops deep on the right-hand side and receives a simple pass from Shepherd Murombedzi before driving inside. He looks up, finds Tom Tonks and plays a quick one-two, latching onto the return before his marker has time to turn. Without hesitation, he strikes a ferocious, first-time effort that catches home keeper Charlie Grainger off guard. The back of the net bulges and he has his first goal of the new season.

Afolayan arrived at Solihull Moors in February 2017 as an unknown quantity.

In non-league`s top tier for the first time in their short history, The Moors` season had threatened to derail when Marcus Bignot departed for League Two Grimsby Town. Liam McDonald was plucked from Southern Premier League outfit Hednesford Town as a replacement and despite cutting costs and making wholesale changes to the squad, he was enjoying a run of just two defeats in nine matches.

However, the club had just waved goodbye to top scorer Akwasi Asante and midfield dynamo Jamey Osborne so additional quality was required. With Andy Brown injured, Luke Rodgers on his way out and Pearson Mwanyongo struggling to make an impression, McDonald was relying solely on Harry White in the striking department with Omari Sterling-James offering support to the lone striker.

The expectation was that McDonald would bring in a forward on loan from a Football League club, even after adding Charlton Athletic starlet Regan Charles-Cook to his ranks. Instead, McDonald made the bold decision to bring in 19-year-old Afolayan from 9th tier Loughborough University.

To the surprise of many, Afolayan was immediately drafted into the squad when FA Cup giant-killers Sutton United turned up at the Automated Technology Group Stadium in early February. Two-nil ahead, McDonald gave the new boy his debut on 66 minutes and was rewarded four minutes later with a goal.

It didn`t take long for Afolayan to make a real impression on fans and manager alike. He made four substitute appearances before starting against Dover Athletic, where he was named man of the match, and started nine of the next ten fixtures. Daniel Udoh signed on loan from Crewe Alexandra but returned having been unable to displace White and Afolayan in the pecking order.

He scored the second in a 3-3 draw against Braintree Town during after The Moors had been 3-0 down and scored a brilliant solo goal against Forest Green Rovers. He made it three goals in four matches with a consolation at home vs play-off chasing Barrow as he firmly established himself as a regular member of the starting XI.

Over the summer, many believed Afolayan would depart for the riches of the Football League. Derby County, Brentford, Walsall and Birmingham City were all linked with moves and it felt inevitable that he would move on – clubs like Solihull Moors rarely keep hold of such exciting talents.

Solihull Moors had just about clung onto their National League status the previous season, wins against Macclesfield Town and Eastleigh wiping away the memory of six consecutive defeats and securing survival.

Afolayan signed a one-year deal to remain with the club.

Afolayan found himself playing as a lone striker in attack, forced to hold the ball up, create chances for himself and take them. Leaders were thin on the ground, youngsters were being drafted in from Football League clubs to plug gaps and McDonald was relying heavily on a youngster desperate for more support.

Despite this, Afolayan followed up his season opener against Leyton Orient with the second in a topsy-turvy 3-3 draw with Barrow. He scored twice against Chester to secure the team`s first home win of the season and netted against Dagenham and Redbridge in early October.

After just two wins in 14, Liam McDonald was sacked and replaced by Richard Money who inexplicably dropped Afolayan for the huge trip to Guiseley, choosing to play full-back Jordan Liburd as part of a front three instead. Afolayan replaced Liburd after 25 minutes, scored twice and netted the winner against Eastleigh three days later.

Eight goals in 17 matches for a side struggling at the bottom of the league was decent going for a young striker heavily relied upon to do the dirty work with little reward. That goal against Eastleigh would be his last for over two months.

When the news came through on deadline-day about Afolayan`s transfer to West Ham United, there were mixed emotions.

It`s difficult not to be gutted when a player of such quality and potential leaves your club but there are no hard feelings from anybody at Solihull Moors – this was an opportunity he could not turn down. Oladapo Afolayan is now a Premier League footballer.

Yet he departs as a player whose spot in the starting XI was no longer assured.

After a disastrous start to the season, Mark Yates took the reigns at Solihull Moors. Bottom of the league, they introduced full-time training and despite just one win in their first seven matches in charge were suitably impressed by the team`s performances in a 4-3-3 system. Past performances counted for little as Yates judged the team on what he saw with his own two eyes. Everybody was starting from scratch.

Twelve points adrift of safety, The Moors secured a huge three points away at Barrow but Afolayan was left on the bench for 90 minutes. Offered another chance for the New Year`s Day visit of Maidenhead United, he was again struggling to make an impact. The Moors were dominating but the visitors led 1-0, scoring after both sides had been reduced to ten men.

Just over an hour had gone when Afolayan`s finally produced the moment we were all waiting for. Receiving possession on the right-hand side, he was already charging at defender Alan Massey by the time Yates had screamed “run at him”. James Comley tried to help out but couldn`t keep pace with the forward who made it inside the area before producing a low, rasping effort that arrowed through the legs of Carl Pentney. With the pressure on, Afolayan had again delivered a huge goal.

He finished that game with a brace and was on the scoresheet a couple of weeks later at Dagenham and Redbridge to secure a 3-1 victory, moments after coming off the bench. The Moors would enter February one point adrift of Barrow and safety.

So, what are West Ham actually getting for their money? After all, their supporters are convinced Afolayan`s signing is about putting the club in a positive light after Tony Henry`s recent comments about African players – even if he was born in England.

It was his work-rate and tenacity that initially brought fans onside. Typical of exciting non-league forwards, a lost cause is never a lost cause with Afolayan around while he loves snapping at the heels of midfielders and defenders.

After a few starts, his natural talents came to the fore. Afolayan has a single-mindedness about his forward play, always looking to run at his man and get a shot away – like a National League Jermaine Defoe. Even in his less productive games, you always felt like he might produce a little moment of magic.

Primarily, Afolayan will be labelled an athlete, a striker of pure power who can run past and through opposition defenders but he technically gifted too. He is comfortable striking a ball with either foot and appears to have mastered the art of cutting inside of his man at the last millisecond to completely change direction. He is an instinctive player who can change a game in an instant.

There is work to do. Afolayan plays with his heart on his sleeve and possesses a raw frustration and aggression that can go one of two ways. In some games he may produce a moment like he did against Forest Green Rovers, Leyton Orient or Maidenhead United, taking the game by the scruff of the neck. In other games he will embroil himself in needless squabbling and physical battles he doesn`t need to get involved in – the 0-0 draw against Boreham Wood is one instance that comes to mind.

If Afolayan can learn to strike the right balance between playing with head and playing with heart, he will have a fine career in the Football League, potentially even the Premier League. Playing alongside academy products and training first-team players such as Lanzini, Arnautovic and Hernandez can only help.

It feels like the right time for him to move on. For Afolayan, the chance to learn his trade away from the pressures that come with playing week in, week out during a relegation scrap are likely to do his all-round game a world of good. For Solihull Moors, receiving money for his transfer is a bonus and if truth be told, we are becoming less reliant on his individual brilliance.

I do think we will miss him, every side in the National League would be grateful to have a talent like Afolayan at their disposal. However, with Jermaine Hylton firing on all cylinders and Kwame Thomas signing permanently, we are in a good position. Adi Yussuf`s debut double has made him an immediate fan-favourite while Alex Reid (Fleetwood Town) and Opanin Edwards (Bristol City) have joined on loan hoping to make a real impression.

It`s been an absolute joy to watch Oladapo Afolayan at Solihull Moors and we will be keeping a keen eye on his development.

All the best, Dapo.